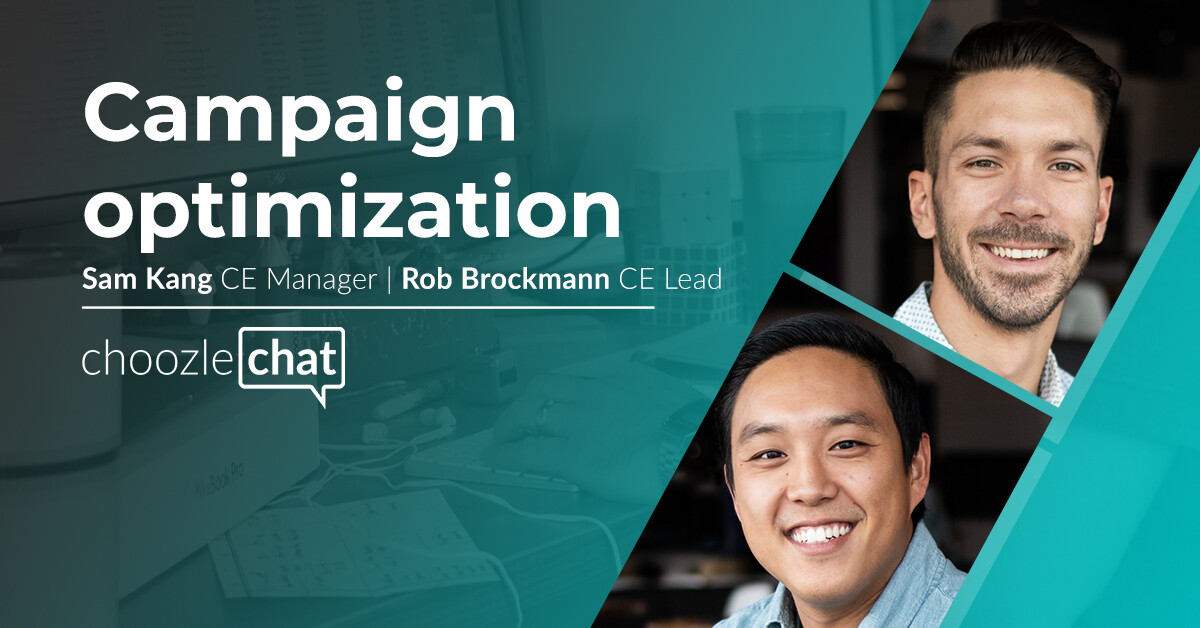 Megan Sullivan-Jenks, Director of Marketing, Choozle: To kick things off, a random, yet telling question: If you had to watch one TV show over and over again for the rest of time, what would it be?

Rob Brockmann, Client Engagement Lead, Choozle: I would have to go with Frank Reynolds and the gang from It’s Always Sunny In Philadelphia.

MSJ: Alright, now onto optimizations. What do advertisers need to have in place, first and foremost, before thinking about making any changes or optimizations to their campaigns?

RB: Make sure your ABCs are in place: audience, budget, creative. Audiences should be well thought out and relevant, budgets should be aligned across all ad groups to ensure proper pacing, and creative messaging should be consistent with the audience and campaign goals. If these key components aren’t aligned, optimizing your campaign is going to be that much trickier.

SK: Advertisers will first need to make sure their campaign & ad groups are set up correctly for the goal they are trying to achieve. Without having a proper launch, it’s hard to know which optimizations to make since each one should reshape your campaign towards your goal.

MSJ: It’s recommended to wait at least 72 hours before making any optimizations to a digital advertising campaign. Why 72 hours, and how often should optimizations be made thereafter?

RB: 72 hours provides the campaign enough time to launch and find a performance groove. Additionally, you want to have enough statistically significant data in order to make those data-driven optimizations—and 72 hours ensures relevant data should be available. This is relative to the reach or scope of the campaign, of course.

SK: 72 hours is the typical time it takes for a campaign to get ramped up. Our system takes that time to adjust to targeting layers and see full potential media spend.

Once you’ve made initial optimizations to your campaign, we typically tell advertisers to wait 48–72 hours before making additional optimizations. That way, you can see how your campaign reacts to the first optimization and give you a better insight into which changes really make an impact.

MSJ: In your opinion, what’s the one campaign optimization that typically throws clients for a loop? Do you have any tips for making it easier?

RB: An often overlooked campaign optimization is simply reallocating budget from underperforming ad groups to higher performing ad groups. Continuing to throw budget at a broken or lacking ad group won’t make it perform any better, and in fact may result in just the opposite, fueling the ad group’s negative performance.

SK: Clients are often thrown off by creating a preferred list or block list—and understandably so. The “Tail Aggregate Report”, which breaks down each site where an impression has been served, can be a lot to digest and discourage clients from putting in the time to go through their inventory.

However, it’s worth taking the time to learn this optimization tactic. The more you understand where your media dollars are going, the better you’ll be able to mitigate wasted impressions which, in turn, means you’re spending your dollars on quality inventory with proven success.

MSJ: What’s the best way to set campaign performance KPIs (key performance indicators)? How can reporting/data influence these and tie them in with needed optimizations?

RB: Set your ad group goals from the start and optimize towards those KPI measurements throughout the campaign’s flight, and I always urge that campaign KPIs align with the goal(s) of your campaign. For example, it doesn’t make sense for an awareness or branding campaign to have a CPA goal set at the ad group level. In this example, you’d want to optimize toward reach instead.

SK: You want to have enough data handy to make optimizations from. Choozle’s detailed reporting will provide a transparent look into how each ad group is performing and how much engagement each creative type is driving—with this information, you’re able to narrow in on your ideal audience.

I always recommend the waterfall approach. Start broad, and after a couple of days worth of data you can start to “trim the fat”, for lack of a better term, to hone in on the audience that’s most likely to convert.

MSJ: Optimizations can be a complex, nuanced topic. If you could give one piece of advice to keep in mind when optimizing their campaigns across the board, what would it be and why?

RB: Keep it simple! Don’t implement more than a couple of optimizations at any given time, and be sure to allow enough time to measure the impact of your last optimization before making additional changes to your campaign.

Also, utilize the Choozle Support Center and our vast knowledge base for access to platform support and resources on all things optimization!

SK: I second Rob’s advice—keep it simple. It can be easy to want to make too many changes all at once and this can make things more difficult than it needs to be. Continue to take small steps toward a bigger goal, and don’t be afraid to ask questions as programmatic advertising is an ever-evolving industry.