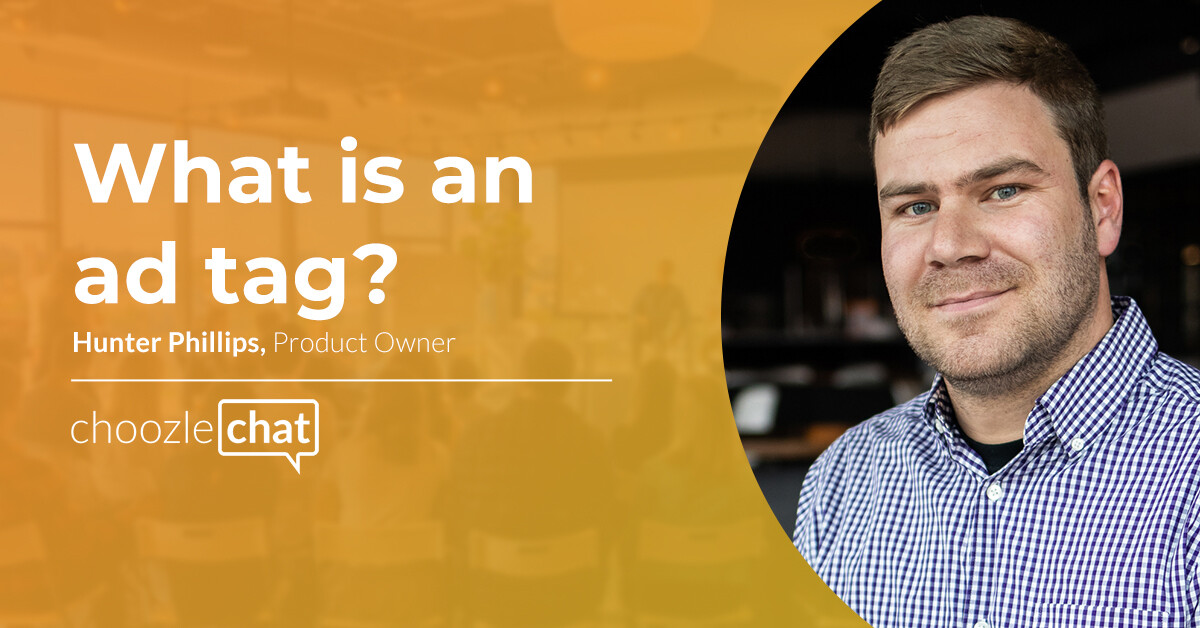 choozlechat: What is an ad tag? With Hunter Phillips

Hannah Middleton, Content Manager at Choozle: To kick things off, let’s start with a random, yet telling question: If you had to watch one TV show over and over again for the rest of time, what would it be?

HM: Now that we’ve got the important stuff out of the way, let’s talk ad tags–what are they exactly?

HP: An ad tag is a snippet of code that is inserted into the source code of a publisher’s web page via an ad server. When the web page loads, the ad tag tells the browser where and how to display the ad to a website visitor.

HP: Ad tags allow advertisers to optimize their digital advertising campaigns more quickly and easily because they can report on and segment their viewers based on real-time data passed from an ad tag to an ad server. In addition, ad tags provide advertisers the ability to update or rotate an ad’s content directly from the ad server based on this data, allowing for further personalization of each impression served.

HM: What are ad tag macros?

HP: Macros are unique parameters that are placed into an ad tag’s code and allow the system to pull dynamic data points specific to the ad’s placement. The two most important macros are the click and the cache buster macros. The click macro tells the ad server when an ad is clicked. The cache buster macro is a randomly generated number which ensures that a duplicate, cached version of the ad is not reloaded when the page is refreshed.

HM: How does an ad tag move between the publisher, demand-side platform, and the advertiser?

HP: First, an advertiser uploads a creative asset to a third-party ad server where it’s converted into an ad tag. Then the advertiser uploads the ad tag to a demand-side platform (DSP) or another ad exchange, where they enter an auction and bid on inventory from a number of publisher sites across the DSP’s network. If the advertiser wins the auction, the publisher and advertiser’s ad servers communicate to render the content on page load.

HM: What are the differences between pixels, snippets, tags, and scripts? Are they synonymous?

HP: Well, in ad tech, there is a ton of ambiguity around these words, but I’ll try my best to break down some of the definitions as I understand them.

The words tag and pixel are often used interchangeably because they both serve the same purpose. However, while most pixels fall into the tag bucket, not all tags are pixels.

A pixel generally refers to a 1×1 image pixel used for capturing website traffic. Pixels are most commonly placed on web pages to track who visited the page in order to record a conversion event or build a retargeting audience.

In addition, tags can also refer to creative ad tags, or code snippets provided by ad servers to display ads on publishers’ websites.

A snippet just refers to any smaller, reusable piece of code or text and is often used as a broader umbrella term for tags and pixels. A script is also a piece of code, but generally, one that executes a specific task or action.

HM: What are some common questions you get around ad tags?

HP: Most of the ad tag questions we receive are around what types of tags we accept and which ad servers we support.

We support a wide range of third-party display tags including JavaScript and iframe formats, as well as VAST tags for third-party video assets You can also find a full list of our approved ad servers in our support center, and we can generally support additional ad servers so long as our click and cache buster macros are inserted into the ad tags.