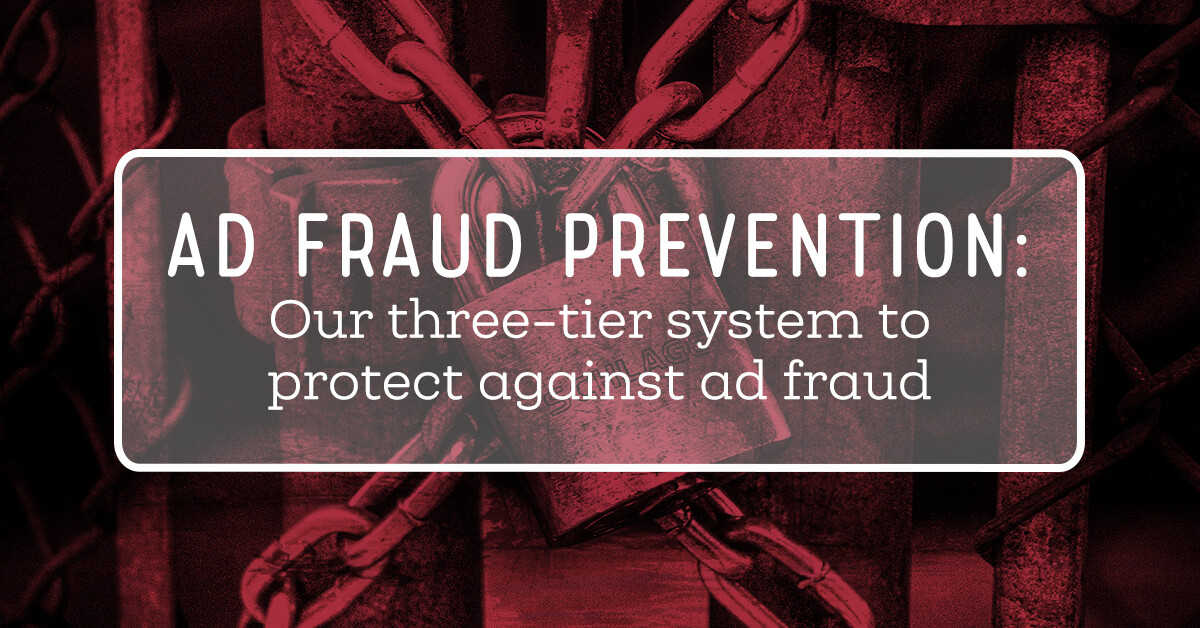 Programmatic advertising is ever-growing, taking more of the multi-billion dollar display advertising pie each year. According to eMarketer, 82.5 percent of all US digital display ads will be bought via automated channels, with that number continuing to rise in the following years. With this, how is the industry shaping up around brand safety issues and initiatives, and more specifically, ad fraud prevention?

We just passed the three year mark for our three-tier ad fraud prevention system implementation, so we’re taking a look back at what we’ve learned since then.

What is ad fraud?

In short, “ad fraud” is an umbrella term that refers to any illegitimate activity on an advertisement at the expense of the advertiser. As advertising budgets keep shifting to digital, fraudsters have found ways to game the system with the practice of fraudulently representing online advertisement impressions, clicks, conversion, or data events.

Should advertisers and agencies be responsible for detecting and preventing display advertising fraud?

Well, yes and no. Although programmatic is no longer riskier than buying from the general market and total projected fraud losses are down by 10 percent overall, according to a study by the Interactive Advertising Bureau (IAB) and Ernst & Young, fraud costs the U.S. digital marketing, advertising, and media industry $8.2 billion annually.

With increased media buying taking place in-house, there’s an increased responsibility on marketers and advertisers to not only run successful digital advertising but protect their company and clients from fraud on their own. But, are they the best equipped to handle the complexity of detecting and preventing fraud on all of the different levels it can exist within?

At the beginning of this year, MarTech Series published an article putting out an “open call for the industry to take responsibility” when it comes to working together to “implement fraud prevention tools and approaches centrally and consistently in order to dramatically reduce and even eliminate ad fraud,” and we can’t help but agree. What advertisers and agencies need is a programmatic solution that will take care of the majority of brand safety and fraud issues so they can focus on what’s important to them or their clients: digital advertising campaign success.

Enter: A system that detects & prevents fraud at three distinct levels. The Choozle platform runs a unique, three-tier display advertising fraud prevention system on each and every campaign run in-platform.

Every display-side platform (DSP) has their own ad fraud detection techniques and ways of implementing ad fraud prevention, but Choozle’s three-tier approach is unmatched in the space. “Having the ad server doing it at an individual, per-IP basis, and then us doing it on a full network-wide inventory level is a unique thing,” said Hunter Phillips, Platform Operations Engineer, who created and maintains the three-tier system. “It’s critical that we employ a dynamic approach and continually tweak and improve our strategy to keep up with the evolving landscape of ad fraud.”

This is a continually updated, user-level IP block list. This dynamic list goes all the way down to the IP-level, looking for any suspicious activity or anything that could potentially be bot traffic.

Here, our own “fraud hunter” technology comes into play. This is a network-wide block list that’s also dynamically updated, similar to tier one, but on a weekly basis. The hunter looks for suspicious click-through or win rates (see below graphic), and if they meet certain parameters that we’ve deemed suspicious, it’s automatically added to the block list. The yellow flag parameters are manually inspected and added as necessary. 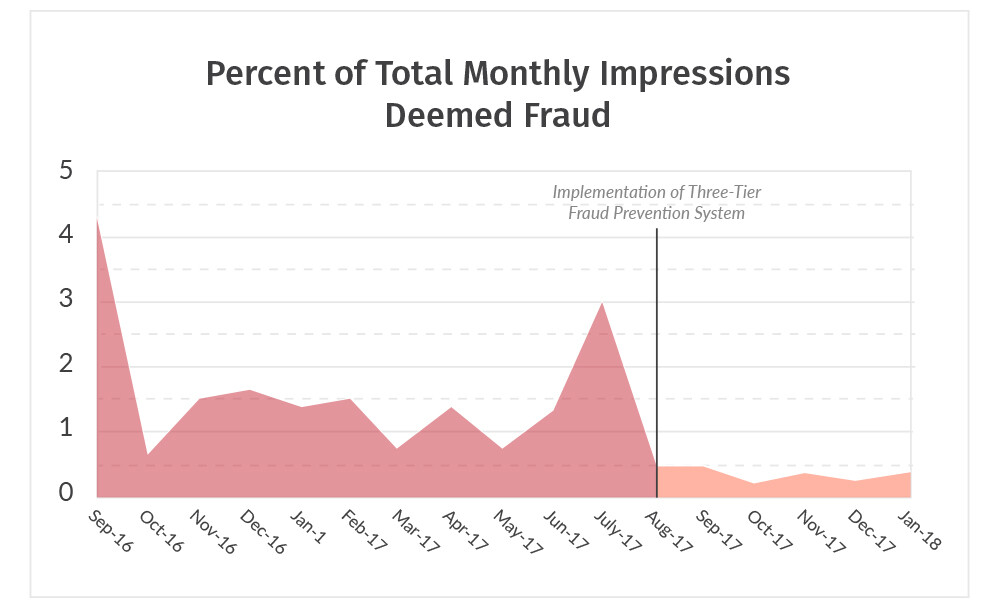 This covers the ability for advertisers in our platform to create their own block lists. Now that we have detailed reporting available in-platform, Choozle users are able to do that on a much easier and more frequent scale. The benefits of this ability and its benefits for fighting display advertising fraud isn’t lost on us—in fact, detailed reporting was a feature we released in hopes that it would help further our efforts for ad fraud prevention.

Chat more with the keepers of our three-tier system, Kendra and Hunter.

What you can do: Action items at the advertiser level for ad fraud prevention

The first step to ad fraud prevention is understanding it. You’re in the right place, but another good starting point is to learn more about Methbot, a type of Clickbot that generates $3 to $5 million per day in fraudulent revenue. WhiteOps is a reliable resource for learnings on the subject, as well as resources like downloadable lists of compromised Methbot IP addresses and spoofed domains. Other things to keep an eye out for can be found in this post about signs of ad fraud.

Next up, analyze your campaign data and create comprehensive block lists. The block lists should also be paired with a preferred list to create a solid foundation for safer ads. These lists should be consistently reviewed and refined over time.

And finally, whenever possible, optimize your campaigns for hard conversions with clear intent such as discounts, contact form submissions, signups, etc. These types of campaigns will be much less prone to fraud.